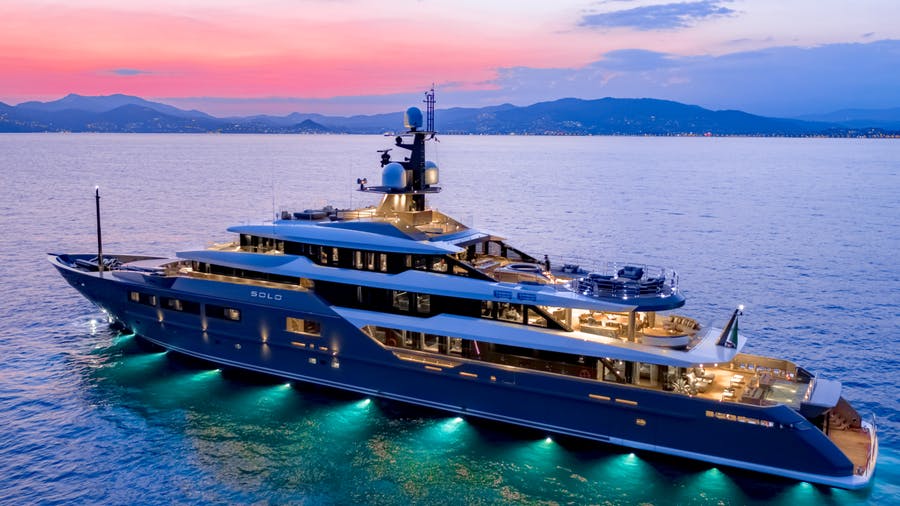 Truly, there has never been a better time to get away from it all, and there is no better, more luxurious way to do so than on the glorious 92-foot Mangusta superyacht, Vanish, which could be yours to own, and holiday on, whenever and wherever you like.

Arguably, there’s also no better place to be away from it all than the incredible island paradise of the Whitsundays in tropical Queensland, where Vanish is currently awaiting delivery to one incredibly lucky owner.

If you’ve ever sat in a Rolls-Royce, you’ll know the feeling of opulent serenity combined with a sensation of seemingly limitless power and tremendous thrust – feelings you’ll get in even larger servings from this vast Mangusta yacht.

But what if you could combine the levels of luxury a Rolls-Royce Phantom represents with the audacious amounts of power available from the company’s equally famous jet engines?

That would be something very special indeed, something like Vanish, which offers a level of opulent comfort undreamed of even by Phantom owners, combined with craftsmanship, style and design.

The majestic 92-foot Mangusta Vanish is the Rolls-Royce of superyachts, and not just because it offers the power, convenience and fuel economy provided by its Rolls-Royce Kamewa jet drives (powered by dual MTU 16V2000s, to be specific).

There’s also just a touch of Ferrari flair about the 92-foot Mangusta Vanish thanks to its rich Italian heritage.

Vanish was custom-built by the famed Italian shipyard Overmarine Mangusta and is, undoubtedly, the largest-volume open-plan yacht in its class in Australia.

Frankly, terms such as “largest” feel insubstantial in this case. The superyacht’s sense of space and understated onboard grandeur is more akin with what you would find in a beautiful, and obviously waterfront, holiday home.

Much like such a high-class home, it looks absolutely stunning – sharp, sleek and purposeful, with its timelessly stylish and colossally classy exterior.

Vanish is ready to become someone’s truly special home away from home, with plenty of luxurious accommodation and entertaining areas to bring friends and family along for the ride.

A highlight for its new owners is the full-beam master stateroom, which is a whopping 6.6 metres wide and features horizon-hull windows for taking in the view even while luxuriating in your giant king-size bed, plus an owner’s office and even a walk-in wardrobe.

Altogether, there are four grand guest suites, all with private ensuites (plus space for four crew or even more of your extended family or friends).

Inside, the 92-foot Mangusta superyacht Vanish doesn’t just hail from Italy, it feels like Italy, with its stunningly bright and airy beach club-style saloon surrounded by panoramic picture windows, a restaurant-like formal dining area – with seating for 10 – and a custom-built bar.

Purposefully designed, this Mangusta motor yacht underwent a major refit this year and last that included an all-new audio-visual entertainment system throughout offering audio quality second to none, plus a Furuno electronic package.

Then there’s the spectacular new custom Mediterranean interior that offers all the solidity and serenity for which Mangusta is world-renowned, and more.

It’s difficult to imagine you’d ever want to leave the giant custom daybed (located on one of the largest aft decks that also conveniently converts into a 10-seater table for dining under the stars).

But if you do there’s plenty of entertainment to choose from, with a Zodiac ProJet 420 parked in the enormous tender garage – which doubles as a beach club – plus two Jobe paddleboards, water-skis and other water toys. A world of entertainment awaits.

And while Vanish is currently moored, ready for delivery, in the wondrous azure waters of Queensland’s Whitsundays, the whole world will become a playground for its new owner.

Thanks to those Rolls-Royce jet units, powered by MTU engines, and its rare and ingenious shallow draft of just 1.1 metres, this superyacht can motor in close to any island you choose, and can just about to deliver you to the beach while other smaller boats are forced to anchor further out.

But on a boat like this, you don’t need to be near other people at all. A superyacht of this size and scope, matched with unparalleled manoeuvrability and fuel economy would also make an incredible splash in Sydney Harbour, of course, where it would instantly become one of the most striking and admired vessels.

With the world-famous sea-keeping abilities you expect from Mangusta, one of the most awarded international superyacht builders, due to its excellence in design and flawless quality, you’d also be able to relish a cruise out of the famous Sydney Heads and up to the truly spectacular Pittwater region.

Indeed, with your onboard crew doing the work if you prefer, and those 2000hp MTU-powered Rolls-Royce jets, you could keep on cruising all the way to the new celebrity enclave of Byron Bay, or the sparkling sands of the Gold Coast’s vast beaches.

Vanish is a holiday home that travels with you, with the joy of each new destination made even more special by the spectacular surroundings in which it can immerse.

Perhaps the best news of all, though, is that Vanish is offered in Australia by Torrens Luxury Collection at an unbelievably tempting price of $3,950,000 – a number that would normally only get you a much smaller motor yacht.

Truly, $3.95 million looks very well priced indeed for a unique holiday opportunity to discover the islands of the Whitsundays with family and friends.

Previously the owners of the largest brokerage house in the Asia Pacific region – Grant Torrens International Marine – the Torrens Luxury Collection has now been established by the two of them to deliver the best possible experience in both the brokerage and chartering of luxury assets from around the globe.

Rarely, though, will they have the opportunity to offer something as special, spectacular to look upon and life-changing as the Mangusta Vanish – the Rolls-Royce of superyachts.